Day 3 of The Hour of Code brought Kindergarten, 4th Grade and 6th Grade (back for round 2) into the lab. 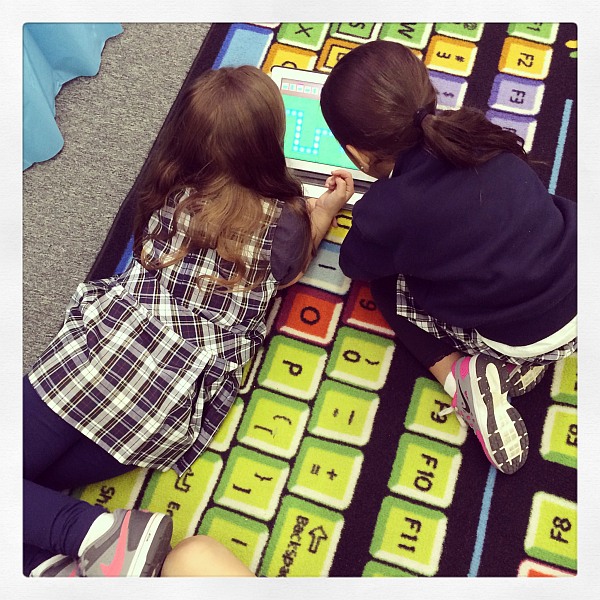 Since Kindergarten has also been using Bee-Bot this year, the day started out talking about programming with the Bee-Bot and having the Bee-Bot move in a square. After this, Kindergarten learned a little bit about the fuzzFamily and how they came to be on Smeeborg and then they saw a demo of the first level of the Kodable app. Then it was time to get into pairs (or a trio for the boys) and try out the app! There was a little confusion with the conditionals but everyone figured it out and had a great time. I can’t wait to see how far they get tomorrow.

6th Grade was up next in the lab for their second day of The Hour of Code. The boys in the class continued with MIT App Inventor and the girls decided to check out some Javascript with Code Avengers. Unfortunately, we had a very difficult time getting the emulator to load in MIT App Inventor which means it wasn’t possible to test the Talk To Me apps that were completed. I did show a couple of them on the demo computer which leads me to believe that it might be a memory problem on the student computers since they have less memory than the demo computer. I plan to have 6th Grade do some more coding next week since they didn’t make the progress they (or I) would have liked this week.

4th Grade was the final class for the day. After watching the The Hour of Code introduction video, 4th Grade started to work their way through the Code.org drag & drop programming option for the 20 minutes they had left of class. They made really good progress and I can’t wait to see how many of them make it through the rest of the levels tomorrow.

Deal on Kodable Pro: The Kodable app that we are using for The Hour of Code is a free app but there is also a Kodable Pro app (with even more levels) that is normally $6.99. For Computer Science Education Week, you can now get this app for $0.99!